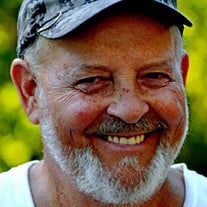 Mr. Allen C. Bugg, of Hephzibah, GA, passed away on Friday, April 17, 2015 at his residence. A lifelong resident of the Augusta area he was the son of the late Thomas Bugg, Sr. and Ruby Ellis Bugg. He was an avid outdoorsman, who enjoyed hunting... View Obituary & Service Information

The family of Allen C. Bugg created this Life Tributes page to make it easy to share your memories.

Send flowers to the Bugg family.