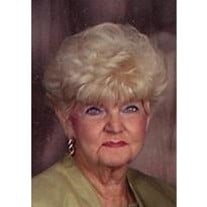 Betty Jane Luke Jones Mrs. Betty Jones, loving wife of Jimmy “J.J.” Jones, of Old Louisville Road, died on Friday, June 18, 2010, at her home. She was 72 years old. The family will receive friends on Monday, June 21, 2010 from 5:00 p.m. until 6:00 p.m. at The Poteet Funeral Home, 3465 Peach Orchard Road. The memorial service will follow the visitation on Monday at 6:00 p.m.in the funeral home chapel. Rev. David Shelton will officiate. Along with her husband, Jimmy, she is survived by her children, Sandy Bailey and her husband, Ed, of Grovetown, Frank Lord of Augusta, Ronnie Lord and his wife, Priscilla, of Belvedere, Tina Green and her husband, Raymond, of Martinez, Barbara Johnson and her husband, Jay, of North Augusta, and Sabrina Fulcher and her husband, Shane, of Waynesboro; her sister, Sara Hammick and her husband, Rod, of Beaufort, South Carolina; seven grandchildren; five great-grandchildren. She was preceded in death by her daughter, Margie Rester, in 1981; her granddaughter, Laura Lee Yonce, in 2008; her brother, Amos Luke, earlier this year; and by her parents, Leonard G. and Bobbie Ann Heath Luke. She was a member of Providence Baptist Church. Prior to her retirement, she was the manager of the deli at K-Mart in North Augusta. She was a member of the Order of the Eastern Star Hephzibah Lodge 312, and Alee Temple and Shrine Club of Augusta. She was a wonderful cook and a loving and devoted wife, mother, and grandmother. Working in her yard gave her great pleasure. The family wishes to express their heartfelt thanks to Trinity Hospice for the wonderful care Mrs. Jones received. Memorials may be made to Trinity Hospice Benevolence Fund, 2803 Wrightsboro Road, Augusta, Georgia 30909. The Poteet Funeral Home, 3465 Peach Orchard Road, Augusta, Georgia 30906, 706.798.8886, is in charge of the funeral arrangements.

The family of Betty Jane Jones created this Life Tributes page to make it easy to share your memories.

Send flowers to the Jones family.