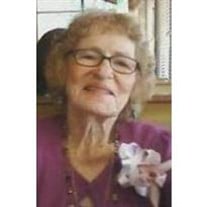 Betty Willhite McAllen Entered into eternal rest on July 8, 2012, at the age of 76. Mrs. McAllen was a retired nurse and a member of St. Mark United Methodist Church in Augusta, GA. Mrs. McAllen is survived by her four daughters Sally... View Obituary & Service Information

The family of Betty McAllen created this Life Tributes page to make it easy to share your memories.

Entered into eternal rest on July 8,...

Send flowers to the McAllen family.