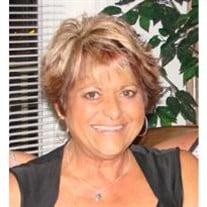 Mrs. Beverly Blanos Way, a lifelong Augusta resident, died on Thursday, October 23, 2008 from injuries received in an automobile accident. She was 63 years old. The family will receive friends on Sunday, October 26, 2008 from 1:00 p.m. until 3:00 p.m. at The Poteet Funeral Home, 3465 Peach Orchard Road, Augusta. The memorial service will be conducted on Sunday at 3:00 p.m. in the funeral home chapel. Mrs. Way will be cremated and burial will be a private service at a later date. Mrs. Way is survived by her husband, Billy Way Sr.; daughters, Aly Way of Fayetteville, North Carolina, and Traci Way Brown and her husband, Mark, of Perkins, Georgia; step-sons, Billy Way Jr. and his wife, Paige, and Paul Dennis Way and his wife, Brenda, all of Columbia, South Carolina; her grandchildren, Katie Way Brown, Kenzie Way, Ellen Paige Way, Reese Way, and Adams Way; her brother, Richard Blanos; sisters, Rene Blanos Crunkleton and her husband, Gary, and Jamie Blanos Weeks and her husband, Michael; her nieces and nephews, Melissa and Jon Singletary, Ashley and Greg Farmer, David Crunkleton, George Weeks, and Isabel Weeks; her friends, Tye Tipton and Henry Hammock; her best friend, Cathy Smith and her husband, Franklin. She was preceded in death by her parents, George James Blanos and Maye Whitlock Blanos. Beverly was a master cosmetologist. For more than thirty years, she managed the hair salon at JB White’s Department Store. After retiring from there, she operated her own beauty shop in Augusta. She attended Waynesboro Church of God. For Beverly, nothing was as important as her family. She loved each member; family, to her, was not limited to relatives. Anyone who was around her became part of her extended family. One of her missions in life was to encourage those around her to involve themselves in every aspect of their family’s lives. The true light of her life was her grandchildren; her granddaughter, Katie, was her constant companion. She loved to hunt and fish. Beverly was an avid gardener. Beverly was a passionate advocate for organ donation. She learned all she could about transplants; her family lovingly referred to her as a “self-proclaimed cardiologist.” The family suggests that memorials be made to Life Link Foundation, 2743 Perimeter Parkway, Building 200, Suite 110, Augusta, Georgia 30909, or to www.lifelinkfound.org. The Poteet Funeral Home, 3465 Peach Orchard Road, Augusta, 706.798.8886 is in charge of the funeral and cremation arrangements.

Mrs. Beverly Blanos Way, a lifelong Augusta resident, died on Thursday, October 23, 2008 from injuries received in an automobile accident. She was 63 years old. The family will receive friends on Sunday, October 26, 2008 from 1:00 p.m. until... View Obituary & Service Information

The family of Beverly Blanos Way created this Life Tributes page to make it easy to share your memories.

Send flowers to the Way family.