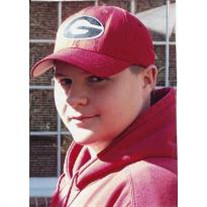 Brant “Bubba” Goins Student – Burke County High School Brant Goins, of Waynesboro, died on Tuesday, June 8, 2010. He was 16 years old. The family will receive friends today, Friday, June 11, 2010 from 5:30 p.m. until 7:30 p.m. at The Poteet Funeral Home, 3465 Peach Orchard Road, Augusta. On Saturday, June 12, 2010, family and friends will assemble at The Poteet Funeral Home, 3465 Peach Orchard Road, Augusta at 10:30 a.m. The funeral procession will leave the funeral home on Saturday at 11:00 a.m. and a graveside service will be held at Brothersville Cemetery when the procession arrives. Rev. David Shelton will officiate. Pallbearers are Drew, Jon, Ricky, Josh, Rick, and Jimmy of The UGA Tailgate Gang. Honorary pallbearers will be members of the Burke County Bears Baseball Team along with, Jeff Boone, Dallas Boone, Paul Atwell, Dalton Moss and Hunter Roswell. Brant is survived by his parents, Rod and Jennifer Brantley Goins of Waynesboro; his sister, Lacie Goins of Waynesboro; his grandparents, Cynthia Goins of Martinez, Jim and Linda Goins of Hephzibah, Susan and Bubba Dyches of Grovetown, Walter and Sheryl Brantley of Evans; his aunts and uncles, Matthew Fields, Kathy Goins, Debbie Beagley, Ashley and Jason Calvert, Chris and Heather Williams, Carla, Marci, Roger and Sheena LaFontaine. Brant would have been a junior at Burke County High School. He played baseball for the Burke County Bears Baseball Team as the pitcher, and at first and third base. He brought a smile to each relationship and left a smile on the faces of every person he met. The Poteet Funeral Home, 3465 Peach Orchard Road, Augusta, Georgia, 706.798.8886, is in charge of the funeral arrangements.

The family of Brant Goins created this Life Tributes page to make it easy to share your memories.

Send flowers to the Goins family.