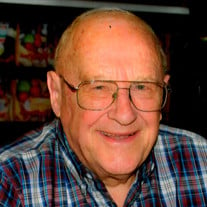 Mr. Carl H. Thieme of Hephzibah entered into eternal rest on December 4, 2014 at University Hospital, Augusta, GA following a brief illness. He was 96 years old. He was born in Erfurt, Germany and came to the United States at the age of five. Mr. Thieme was a graduate of Rutgers University and a founding member of the Delta Sigma Pi fraternity. He enlisted and served his country during WWII as a Sergeant in the US Army Signal Corps in the Pacific Theater including the Philippines, New Guinea and eventually, Kyoto, Japan. He resided in Nutley, New Jersey where he raised his family and had his own automotive repair business until he retired and moved to Hephzibah in 1986. Mr. Thieme served as a member of the National Panel of Consumer Arbitrators for the CSRA Better Business Bureau. He was recognized as the “Better Business Bureau Arbitrator of the Year 1997” representing the Augusta area. Carl was an active member of the Hephzibah United Methodist Church and served for many years on the Finance Committee and Men’s Club. He and his wife, Ruth L. Thieme established the Carl and Ruth Thieme Scholarship Fund to financially assist local scholars. He was a strong advocate for higher education. More than 25 students have benefited from this scholarship fund. Mr. Thieme was well known by family and friends as a man with a quick wit who loved to joke and laugh. He was preceded in death by his wife of 67 years, Ruth Lillian Thieme. He is survived by his son, Carl W. Thieme (Sheila), Marco Island, FL; his daughter, Virginia Rushing, Augusta, GA; two grandsons, Trevor W. Thieme (Laura), Philadelphia, PA and Brandon Thieme (Georgia), Los Angeles, CA; granddaughter, Heather F. Dye, Evans GA; three great-granddaughters, Emily Stinchcomb, Mallory Stinchcomb and Skylar Thieme. He was so very proud of all of his grandchildren. He is also survived by his treasured companion Mary Frances Throckmorton who was a blessing to our entire family. The family will receive friends from 5-7 pm on Sunday, December 7, 2014 at Poteet Funeral Home, 3465 Peach Orchard Road, Augusta, GA. A service to celebrate his life will be held on Monday, December 8, 2014 at 11 AM at Hephzibah United Methodist Church, Brothersville Road, Hephzibah, GA. In lieu of flowers donations may be made to the Carl and Ruth Thieme Scholarship Fund, c/o Hephzibah United Methodist Church, P. O. Box 65, Hephzibah, GA 30815.

Mr. Carl H. Thieme of Hephzibah entered into eternal rest on December 4, 2014 at University Hospital, Augusta, GA following a brief illness. He was 96 years old. He was born in Erfurt, Germany and came to the United States at the age of five.... View Obituary & Service Information

The family of Carl H. Thieme created this Life Tributes page to make it easy to share your memories.

Send flowers to the Thieme family.