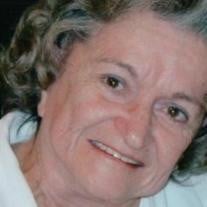 Mrs. Catherine Hawk, of Augusta, entered into rest, on Tuesday, September 18, 2012. Catherine Hawk was called "Granny" by many more people than her grandchildren because once you met her, you were one of the family. She'd spoil you, feed you, talk with you, cheat you in a game of rummy, gossip with you if you had any, and give you some if you didn't. Not a single person escaped her kitchen table, whether it was to eat a heaping portion of mashed potatoes or to have a late night sit down over some "potato juice" and work out all the worries of the world. If a heart could be measured by the amount of food stored in a freezer, sweetness of a tea, number of knocks on a door, sunny days spent at the lake, or hugs and kisses delivered, there still wouldn't be a number large enough to encompass it. Her home was a safe haven for many, a place where no matter what, there was someone who would look after you, fill you up with some good food and laughs, and when you were whole again, give you a swift kick in the pants to get you back on track. She was a daughter, a mother, a grandmother, a best friend and confidant, and a Granny to anyone she met. Her passing is an enormous loss of good in the world, but it is tempered by her reunion with the love of life - her ultimate happiness. And we can once again say "Granny and Papa" because they are now together, hand in hand, heart in heart, forever. Cathy Hawk is survived by her children,Victor Hawk, Sendi Hawk Goss, Jacque Hawk, Michelle Hawk Smith of Augusta; grandchildren, Serse Salmons, Chace Hawk, Kristin Hawk Callaway, Nick Hawk, Rusty Hawk, Jade Hawk, Erin Hawk, Kody Goss, Shay Goss, Trey and Chris Smith; great-grandchildren Ellie Salmons, Charlie Salmons and Oliver Salmons and Grayson Hawk-Godfrey, Cade Callaway and Hayden Hawk. She was a member of St. Joseph Catholic Church, the Elks Club, the American Legion and a lifelong member of Curley World at Indian Cove in Lincolnton. The family will receive friends on Friday, September 21, 2012 from 6:00 p.m. until 8:00 p.m. at The Poteet Funeral Home, 3465 Peach Orchard Road, Augusta. The funeral service will be conducted on Saturday, September 22, 2012 at 11:00 a.m. at The Poteet Funeral Home Chapel. The committal services will follow at Hillcrest Memorial Park. The Poteet Funeral Home, 3465 Peach Orchard Road, Augusta, Georgia, 30906, 706.798.8886, is in charge of the funeral arrangements.

Mrs. Catherine Hawk, of Augusta, entered into rest, on Tuesday, September 18, 2012. Catherine Hawk was called "Granny" by many more people than her grandchildren because once you met her, you were one of the family. She'd spoil you, feed you,... View Obituary & Service Information

The family of Mrs. Catherine White Hawk created this Life Tributes page to make it easy to share your memories.

Mrs. Catherine Hawk, of Augusta, entered into rest, on Tuesday,...

Send flowers to the Hawk family.