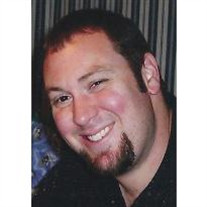 Mr. Chad William Holt Mr. Chad William Holt, of Augusta, died on Wednesday, January 11, 2012. He was 36 years old. The family will receive friends on Monday, January 16, 2012, from 6:00 until 8:00 p.m. at The Poteet Funeral Home, 3465 Peach Orchard Road, Augusta. The funeral service will be conducted on Tuesday, January 17, 2012 at 1:00 p.m. in the funeral home chapel. Chad is survived by his wife, Roxanne Holt, of Augusta; his two sons, C.J. Holt and Logan Holt, both of Augusta; his parents, Mr. and Mrs. William C. and Gail Holt Jr., of Augusta; his father-in-law and mother-in-law, Mr. and Mrs. Ladell P. and Sheree Willis, of Augusta; his sister, Dana Michelle Dominy, and her husband, Michael Duwayne; his grandparents, June Mary Collins, Beverley Hibbs, and Rita Orvides; his nephew, Brandon Dominy. He was preceded in death by his grandfathers, William C. Holt Sr. and Thomas Hibbs. Chad was born in Antioch, California. He grew up near Charleston, South Carolina. As a young adult, he relocated to San Angelo, Texas. Chad came to the Augusta are in 2000. He worked for Sitel for six years. He had been a sales representative for Sherwin Williams; most recently, he was with T-Mobile. Chad loved sports, especially football. He enjoyed wrestling with his sons and fishing with his dad. For memorials, the family suggests that donations be made to a fund that will be established for Chad and Roxanne’s son’s, C.J and Logan. Pallbearers are Michael Dominy, Lawton P. Willis, Russell Beckum, SSG Ronnie Collier, Russell Holmes, and Greg Williams. The Poteet Funeral Home, 3465 Peach Orchard Road, Augusta, 706.798.8886 is in charge of the funeral arrangements.

The family of Chad William Holt Sr. created this Life Tributes page to make it easy to share your memories.