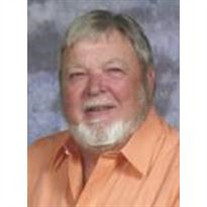 Mr. Charles Ernest Waller, of Hephzibah, Georgia died on Sunday, September 11, 2011. He was 71 years old. Mr. Waller is survived by his wife of more than 47 years, Mrs. June Lanell Kemp Waller; his son, Timothy James Waller and his wife, Becky; his grandchildren, William Craig “Will” Waller, and Shelton Brynn Waller; his sister, Mabeth Mercer; nieces, nephews, and other family members. He was preceded in death by his son, Craig Ernest Waller in 1997. Mr. Waller was born on November 21, 1939 in Emanuel County, near Stillmore, Georgia. He was the son of the late JD and Blanch Pearl Prince Waller. Along with his son and parents, Mr. Waller was preceded in death by his brother, JD Waller Jr., and his sister, Elnita Waller. He was a member of Pine Hill Baptist Church. For more than thirty seven years, he was the owner and operator of Charles Waller Concrete Finishing. Mr. Waller had many hobbies; his passion for racing topped the list. Car races, boat races, and horses were among the events he enjoyed. In his younger days he would even match you for a good foot race. The family wishes to express their heartfelt thanks to the doctors and staff on the Fifth Floor North at Medical College of Georgia for the wonderful care and support they were given. The Poteet Funeral Home, 3465 Peach Orchard Road, Augusta, 706.798.8886 is in charge of the funeral arrangements. Friends may sign Mr. Waller’s online guest register at www.poteetfuneralhomes.com

The family of Charles Ernest Waller created this Life Tributes page to make it easy to share your memories.

Send flowers to the Waller family.