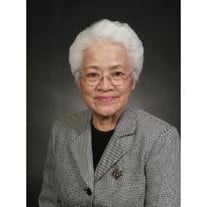 CHIGA TAIRA Hephzibah, GA Chiga Yamada Taira, 77, was called home by our Heavenly Father to live with Him forever Monday night, August 16, 2011. Visitation will be at The Poteet Funeral Home, 3465 Peach Orchard Road, Augusta, on Thursday, August 18, 2011 from 7:00 pm – 9:00 pm. A memorial service to celebrate Chiga’s life will be held on Friday, August 19, 2011 at 1:00 pm at Southside Baptist Church, 3612 Mike Padgett Highway, Augusta, GA 30906. Survivors include her devoted husband of 52 years, Tsutomu “Tom” Taira; her daughter, Gail Taira Lowe (Keith) and their children, Matthew and Katie, of Louisville, KY; her son, Steven E. Taira (Patricia) and their children, Rodney Oncale, II, (Juliet) and their children, Sara and Jackson, and Krystal Oncale, of Florence, SC; her niece, Chiaki Taira Cyr (Jeff) and their children, Alexina, Kayla, and Brianna, of Melbourne, FL; and her brothers, Toshio and Keiji Yamada of Japan. After coming to the United States in 1960, Chiga accepted Jesus Christ as her Lord and Savior in 1963 and has lived her life in bold witness for Him and His Kingdom ever since. She became a published author of Christian books in 1997 and in her last days was able to complete her fourth and final book, Cancer and I, which is currently in production. The family wishes to express their heartfelt thanks to the wonderful people at Trinity Hospice, especially Darry, Susan, and Kathy for their love, commitment, and friendship over the past fourteen months. Those wishing to make a donation in lieu of flowers, may send it to Southside Baptist Church, 3612 Mike Padgett Hwy., Augusta, GA 30906. The Poteet Funeral Home on 3465 Peach Orchard Road, Augusta, GA, 706-798-8886 is in charge of the funeral arrangements. Friends may sign the online guest register at www.poteetfuneralhomes.com

The family of Chiga Yamada Taira created this Life Tributes page to make it easy to share your memories.

Send flowers to the Taira family.