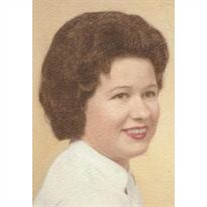 Elsie Louise Parham Elsie Louise Parham of Hephzibah died on Tuesday, June 15, 2010. She was 77 years old. The family will receive friends on Friday, June 18, 2010 from 12:00 pm until 2:00 pm at The Poteet Funeral Home, 3465 Peach Orchard Road, Augusta. The funeral will follow the visitation on Friday at 2:00 pm in the funeral home chapel. Committal will follow at Hillcrest Memorial Park. Rev. Charles Pennington will officiate. Mrs. Parham was preceded in death by her husband, James L. Parham, in 2004. Survivors include her children, Kenneth McCumbers and his wife, Maryann, of Hephzibah, Peggy Ann Hunt and her husband, Tom, of Vincennes, Indiana, Barbara Sue Jude of Waycross, Georgia, Elbert Wendell McCumbers and his wife, Nancy, of Augusta, and Kalvin Eugene McCumbers and his wife, Susan, of Waynesboro; her sisters, Ruth Venable of Langley, South Carolina, Rose Turner of Augusta, and Marie Rhoden of Aiken; nine grandchildren; seven great-grandchildren. Mrs. Parham was an avid bowler. She was a member of the Senior Citizens League at Masters Lanes on Gordon Highway. She loved to fish. The Poteet Funeral Home, 3465 Peach Orchard Road, Augusta, 706.798.8886 is in charge of the funeral arrangements.

The family of Elsie Louise Parham created this Life Tributes page to make it easy to share your memories.

Send flowers to the Parham family.