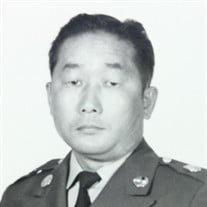 Retired Master Sergeant George Y. Tada U.S. Army Bronze Star Medal – Korea/Vietnam Augusta, GA. – Retired Master Sergeant, George Yoshimasa Tada, United States Army, 87, loving husband of Lisa T. Tada, entered into his eternal rest Saturday, January 27, 2016, at Augusta University Hospital. He was survived by his wife, Lisa Tada, who passed away on June 26, 2016. He was preceded in death by their daughter Laurie Ann. A joint funeral service with his wife Lisa, will be held on August 9th, at 9:45 a.m., at Dallas Heights Baptist Church, 2404 Boykin Road, Hephzibah. Pastor Steven Spencer will be officiating. A combined internment will follow at Hillcrest Memorial Park at 11:00 a.m., 2700 Deans Bridge Road, with a reception to follow. The oldest son of six children born to the late Masakichi Tada and the late Kuni Tada, George was a native of Honolulu, Hawaii Territory, graduating from McKinley High School, class of 1947. He attended Honolulu Technical Training School and enlisted in the Hawaii National Guard prior to enlisting in the U.S. Army in 1948. Upon completion of Basic Training at Schofield Barracks, Hawaii, he was sent overseas to Camp Kokura, Kyushu, Japan, assigned to the 24th Division. He was among the first units in Japan to be sent to Korea at the start of the Korean War. At the end of the Korean War he left the Army briefly and re-enlisted in 1957, completing Basic Training at Fort Ord, California. He was sent to the Provost Marshal General School at Fort Gordon and was the Honor Graduate for Company B. After graduation, he was assigned to Sagami Depot, Japan, with the military police unit from 1957-1961and Zama, Japan, as a MP and Patrol Supervisor. It was during this second posting in Japan he met his future wife, the former Lisa Ogura. They were married November 16, 1960, in Yokohama, Japan. They made their first home in Hawaii, being assigned to Fort Shafter, Hawaii, serving there from 1961-1965. He was then transferred to Germany 1965-1968, Fort Gordon, Georgia 1968-1970, Cam Ranh Bay, Vietnam 1970-1971, Fort Gordon, Georgia, 1971-1973, and Fort McClellan, Alabama, retiring in 1975, after serving over 23 years. It was his assignment to Fort Gordon in 1968, he and his wife Lisa, bought their home and remained for 48 years. He received the Bronze Star, Meritorious Service Medal, Good Conduct Medal w/6th award, Army Occupation Medal, National Defense Service Medal w/oak leaf cluster, Korean Service Medal w/3 bronze stars, Vietnam Service Medal w/ 2 bronze stars, Overseas Service Medal w/ 2 bars, United Nations Medal, Vietnam Campaign Medal w/ 60 device, Presidential Unit Citation, Distinguished Unit Emblem, and the Vietnam Cross of Gallantry w/palm. After retirement, he worked for the Veterans Administration as a police officer in Augusta, and retired from there completing over 30 years of combined Federal service. He worked briefly for local security companies and retail security in Augusta. He and his wife Lisa were active in the local Augusta Baptist churches. He was a loyal friend with a generous spirit, who faithfully served his Lord. He shared his love of animals and raised and trained canines, and adopted two Siamese cats. He donated to many worthy organizations for the betterment of those less fortunate. He was a Life Member VFW Monterey Peninsula Nisei Post #1629, and a member of the Augusta VFW Post, American Legion and many other fraternal and patriotic organizations. He is survived by his sisters Gladys Tachino (Kiyoshi, deceased), Charliet Nakanishi (Eddie, deceased), Amy Teragawa (George, deceased), Lillian Higa (Richard), and many nephews, nieces, grand-nephews and grand-nieces. His younger brother Thomas preceded him in death. The family respectfully requests that in lieu of flowers, memorial contributions may be made to either, Dallas Heights Baptist Church, P.O. Box 547, Hephzibah, GA 30815 or your favorite charity in memory of George Tada. Central Savannah River Crematory is entrusted with arrangements, 706.798.8802.

The family of George Y. Tada created this Life Tributes page to make it easy to share your memories.

Send flowers to the Tada family.