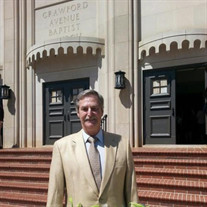 Herbert Marion Hodges, III, of Augusta, died Saturday, January 30, 2021, at the age of 68. Herbert was preceded in death by his parents, Herbert Marion Hodges, II, and Betty Kay Tyler Hodges Williams; and a sister, Kay Hodges Raborn. He is survived by a sister, Shannon Williams McKinley, of Cleveland, Tenn.; a nephew, Robert Bailey Banks, Jr., of Kennesaw, Ga., and a niece, Ashley Raborn Harrington of Milledgeville, Ga. Herbert lived in the Augusta area his entire life. As a young man he enjoyed science fiction and was a Star Trek fan. He attended Wofford College and later worked as a welder, pipefitter, and millwright. He loved to fish and was a fan of the Atlanta Braves and the Augusta GreenJackets. Herbert was baptized at Crawford Avenue Baptist Church in 2014, where he remained a committed member until his death. He walked to church each Sunday, and often told others how much he loved his church and how happy he was since the Lord saved him. Funeral services will be at 10:30am on Thursday, February 4, at Crawford Avenue Baptist Church, 507 Crawford Ave., with the Rev. Bert Daniel officiating. Pallbearers will include his closest friends who were like brothers to him, Jessie Churchwell, Mitch West, and Ronnie Wright; as well as his fellow church members Todd Dickson, Luke Martin, and Chad Trollinger. Burial will follow in Westover Memorial Park. In lieu of flowers, memorial contributions may be made to Crawford Avenue Baptist Church.

The family of Herbert Marion Hodges lll created this Life Tributes page to make it easy to share your memories.

Send flowers to the Hodges family.