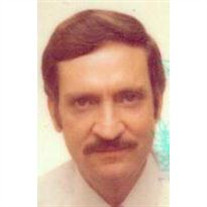 Mr. James “Jim” Lewis Wiley, an Augusta resident, died losing a courageous battle with cancer on Saturday, August 16, 2008 at Eisenhower Army Medical Center. He was 61 years old. The family will receive friends on Thursday, August 21, 2008 from 7:00 p.m. until 8:00 p.m. at The Poteet Funeral Home, 3465 Peach Orchard Road, Augusta. The funeral service will be conducted on Thursday, August 21, 2008 at 8:00 p.m. in the funeral home chapel. A military chaplain will officiate. Mr. Wiley was a veteran of the United States Army, retiring in 1985 with 20 years of service. He served 3 tours in Germany, 1 tour in Vietnam, 1 tour in Korea ending his service at Ft. Gordon. He was decorated with numerous medals and received several awards. After retiring from the military he worked for GTE and General Dynamics for 14 years. He enjoyed gardening and loved boating. Mr. Wiley is preceded in death by his parents James Andrew Wiley and Barbara Gravely Chitwood. Mr. Wiley is survived by Monika Kuenzl Wiley his beloved wife & soul mate; his son, James Lewis Wiley, Jr.; and his daughter, Dana Marie Wiley Pomerance, all of Augusta; sisters, Joyce, Carol, Barbara; brothers, Roy and Richard, sisters & brothers are of the Atlanta area; special brother-in-law, Valentin Kuenzl of Germany; grandsons, Adam Pomerance and Gregory Scott Bowers, both of Augusta; his Border Collie, Sammie B.; and several sisters-in-law and brothers-in-law. The family thanks from the bottom of their hearts Dr. Mary Edgecomb, Dr. O.J. & Staff on 9 West, MAJ. Treat, Jan, Maria, Barbara, Rohnda, Beverly, Ann for the exceptional love & care that was given to “Jim” and his family for the last several years. Also thanks to all of their friends that stood by in support during good and bad times. Contributions may be made to the American Cancer Society, 2607 Commons Blvd. Augusta, 706.791.9900. God looked down and saw the pain in one of his children and felt it was time to bring him home so he could protect him. “Jim” is with God now and will never know pain again. He is now in God’s hands. Full military honors will be accorded at the service.

The family of James L. Wiley created this Life Tributes page to make it easy to share your memories.

Send flowers to the Wiley family.