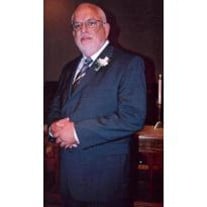 Mr. James Michael “Mike” Singletary of Fairbluff Road in Hephzibah passed away on Tuesday, July 21, 2009. He was 66 years old. The family will receive friends on Friday, July 24, 2009 from 2:00 until 4:00 pm at Cokesbury United Methodist Church, 2005 Windsor Spring Road, Augusta. The memorial service will follow at 4:15 pm at the church. A committal service, with US Navy Honor Guard and Masonic graveside rites, will be conducted on Sunday, July 26, 2009 at 1:30 pm at the Hillcrest Memorial Park Mausoleum. Friends will assemble at the mausoleum on Sunday. Rev. Liza Marler will officiate. Mike is survived by his wife, Hannah S. Singletary; his daughter and son-in-law, Stephanie and Patrick Hallisy, of Augusta; his son and daughter-in-law, Michael and Michele Singletary, of Augusta; his three grandchildren, Michaela Faith Singletary, James Michael Singletary III, Davis Patrick Hallisy; his brother and sister-in-law, James Daniel and Hazel Singletary; several nieces, nephews, other relatives, and close friends. Mike was preceded in death by his wife, Faith Davis Singletary; his parents, James Walter and Annie Matthews Singletary. Mike was an active member of Cokesbury United Methodist Church where he sang in the choir, was a member of the United Methodist Men, the Mixed Nuts Sunday School Class, and many other groups and committees. He was a certified Lay Speaker, an active member of the Ga-Lina Emmaus Community, and had been on two mission trips to Haiti. Mike graduated from Chamberlain High School in Tampa, Florida and served as a Radio Electronics Specialist in the United States Navy from 1961 until 1965. He graduated from Augusta College and went on to pursue two Masters degrees. For more than 30 years, he worked at Georgia Regional Hospital at Augusta and retired in 2000 as a Forensic Psychologist. Mike was a Past Master of George Walton Lodge # 699, F & AM. He had numerous hobbies and enjoyed camping , fishing, hunting, and working in his yard. He could always be seen in the company of his two dogs, Sunday and Gretchen. Mike also enjoyed square dancing and was a member of the Star Promenaders. Mike was a loving husband, father and grandfather and was always eager to share his stories and give advice. His beloved grandchildren were very important to him. His influence in their lives is a legacy that the entire family will cherish. The family wishes to thank the staff at both Select Speciality Hospital and the VA Medical Center - Downtown for their exceptional care. Words can never express our family's gratitude. For memorials, the family suggests Cokesbury United Methodist Church, 2005 Windsor Springs Road, Augusta 30906. The Poteet Funeral Homes, 3465 Peach Orchard Road, Augusta, 706.798.8886 is in charge of the funeral arrangements. Friends may sign the online guest register at www.poteetfuneralhomes.com

Mr. James Michael “Mike” Singletary of Fairbluff Road in Hephzibah passed away on Tuesday, July 21, 2009. He was 66 years old. The family will receive friends on Friday, July 24, 2009 from 2:00 until 4:00 pm at Cokesbury United Methodist... View Obituary & Service Information

The family of James Michael Singletary created this Life Tributes page to make it easy to share your memories.

Send flowers to the Singletary family.