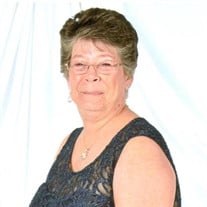 A daughter, mother, mother in law, grandmother, mentor and friend gained her heavenly wings on Saturday, July 15 th . Mrs. Jean C. Bell, 66, unexpectedly joined her beloved husband, Dale W. Bell, in heaven on Saturday. Prior to Dale's death they were married 46 years. Jean was originally from French Camp, California but had lived in the CSRA for the past 42 years. She was predeceased by her husband, Dale W. Bell, a daughter, Miss Holly E. Bell and her father, Mr. Ray Corbit. She leaves to cherish her memories her daughter and son in law, Tina and Gene Burke of Beech Island, SC, a son, of the home, David W. Bell, her mother, of the home, Ms. Iris Merin, one grandson, William Bell, Grovetown, one granddaughter, Velvet Champagne, Alpharetta, Ga., one great granddaughter, Ansleigh Bell. She is also survived by four brothers, Rodney Corbit, California, Mike Corbit. Arizona, Danny Corbit, Arkansas and Curt Corbit, Nevada and one sister, JoAnne Woods, Arizona. The family also wants to recognize her daughter and soon to be grandson by heart, Hannah Myers and Hannah's unborn son, Aiden along with numerous cousins, nieces and nephews. Jean attended Amazing Grace Baptist Church in Beech Island with her daughter. The funeral will be held on Friday, July 21 st at 10AM in the Chapel of Poteet Funeral Home, 3465 Peach Orchard Road with Pastor David Hixon, Sr. officiating. After the services she will once again join her husband at his side in Hillcrest Memorial Park. The family will receive friends on Thursday evening from 6-8 pm at the funeral home.

The family of Mrs. Jean C. Bell created this Life Tributes page to make it easy to share your memories.

A daughter, mother, mother in law, grandmother, mentor and friend...

Send flowers to the Bell family.