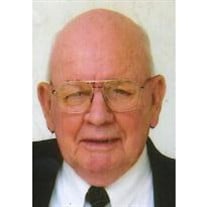 Mr. Jerry V. Hall, of Augusta, died on Tuesday, February 15, 2011. He was 80 years old. Mr. Hall is survived by his wife of more than 50 years, Mrs. Betty hall; his children, Pam Irvin, and her husband, John, of Huntersville, North Carolina, Glenn Hall of Augusta, and Ronnie Hall, and his wife, Sybil, of Augusta; five grandchildren; nine great-grandchildren. He was preceded in death by his daughter, Lisa Davis, in March of 2010; his parents, David Hall and Christolee Mitchum; his sister, Beauvia Megivern. Mr. Hall served in the United States Air Force during the Korean Conflict. Along with his father, he operated Halls Steeplejack painting Service. Mr. Hall retired, after more than 30 years of service, from Ruths Salads as a route supervisor. He was a lifetime member of VFW Post No. 649, and had been a member of American Legion Post No. 178. He loved the family’s best friend, their Pomeranian, Sam. He will be remembered as a loving husband, and a beloved father and grandfather. For memorials, the family suggests the Leukemia Foundation, The Leukemia & Lymphoma Society, Donor Services, P.O. Box 4072, Pittsfield, MA 01202, or online at www.lls.org.

The family of Jerry Vellee Hall created this Life Tributes page to make it easy to share your memories.

Send flowers to the Hall family.