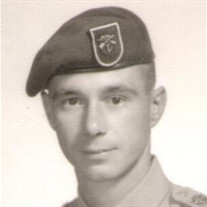 Augusta, GA. MSG Jimmie G. Anderson Sr. Augusta, GA age 76, passed away Tuesday, May 13, 2014, at Eisenhower Army Medical Center. He leaves behind to cherish his memory his loving wife of 55 years Maxine; son, daughters and spouse(s) Jim, Karen (Curtis) and Laura (Shawn); grandchildren and spouse(s) Mark, Ricky, Ashley, Rachel (Thomas), Danah (Jose) and Brittany; 1 great granddaughter, Sydney; brother, sister and spouse(s) Brian (Cheryl) and Vicky. Mr. Anderson was born to the late Garth and Gladys Anderson in Decatur, Indiana on February 13th, 1938. A retired Vietnam veteran of 21 years service in the United States Army, he was awarded many military honors including the Bronze Star, Meritorious Service Medal, Army Commendation Medal, Combat Infantry Badge and Special Forces Tab. Additionally he was a Master Parachutist and a Military Freefall Jumpmaster. After his retirement from the US Army Mr.Anderson worked for the City of Augusta at Bush Field Regional Airport in the Aviation Department, from which he retired after 18 years of service. He was very active in Veterans' affairs and served as a VFW District Commander, as a Commander of VFW Post 649 and was a member of the American Legion Post 178. He was also 32nd Degree Mason and a member of the Sojourners Lodge. Family will receive friends Friday, 1 pm to 2 pm at THE POTEET FUNERAL HOME, 3465 Peach Orchard Rd., HWY 25, Augusta, 30906 with Memorial Services to follow at 2 pm at the funeral home with Mr. Skip Underwood, officiating. Full Military Honors will be performed at the funeral home. Burial will be at the convenience of the family in Hillcrest Memorial Park.

The family of Mr. Jimmie G. Anderson Sr. created this Life Tributes page to make it easy to share your memories.

Send flowers to the Anderson family.