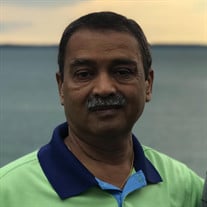 "The world has lost a very special person on Thursday June 27th, 2019, Keyur Patel. He was a wonderful husband, father, brother and much more to family & friends around the globe. Keyur was born in Zadeshwar, Gujarat, India on September 30th, 1961. He is survived by his mother Urmilaben, wife Kirtida, son Nisurg, daughter Riddhi, Elder sister Shetal, younger brother Bijit and the many family and friends he touched in his life. He grew up in Vadodara, India and lived there until immigrated to the United States at age 24. He explored several parts of the country including Columbus, Ohio, where he completed his education. He then moved to New Jersey, which he called home until 2002. And ultimately moved to N. Augusta, S. Carolina where he and Kirtida have raised their children, who both attended The University of South Carolina. To anyone who ever had the chance to meet him, they would describe Keyur as larger than life. People gravitated to his charm, charisma and kindhearted personality. While he always spoke the truth he never let that get in the way of his kindness, generosity and compassion for people. Prior to running his own business, the Friendly Mini Mart 628E Buena Vista Av. North Augusta, he was a master machinist in New Jersey, where he made high precision tooling and parts. His hobbies followed his career path. He loved to fix things and the more difficult the task the more motivated he was to face the challenge. He had the touch of a surgeon working on small machines and electronics. With his persistence, nothing ever ended up in the trash. Keyur’s interest in tinkering didn’t just stop with machines and electronics, his passion extended to a love for food. At any family gathering everyone would patiently await his next culinary adventure. Meals spent together enjoying his epic sandwiches accompanied by his love for story telling were the highlights of any event. He ensured everyone was always well feed and included in the experience. His love for food, friends and family was rivaled only by his passion for the NY Jets. No matter where he lived, he never wavered in his dedication to his team and has passed that passion down to Nisurg and Riddhi. Keyur lived life through his heart and now his soul and spirit will live on in all those who had the privilege to share a moment in time with him. The Patel Family and the community at large has lost a Son, Husband, Father, Brother, Uncle, Nephew and friend." Services will be held 11AM Saturday June 29, 2019 at Poteet Funeral Home-Chapel ,3465 Peach Orchard Rd , Augusta, GA .

"The world has lost a very special person on Thursday June 27th, 2019, Keyur Patel. He was a wonderful husband, father, brother and much more to family & friends around the globe. Keyur was born in Zadeshwar, Gujarat, India on September 30th,... View Obituary & Service Information

The family of Mr. Keyur Patel created this Life Tributes page to make it easy to share your memories.

Send flowers to the Patel family.