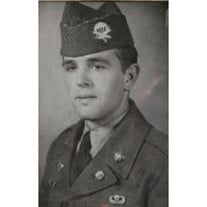 Mr. Lilbern S. Zahner of Hephzibah went home to be with his Lord and Savior on Friday, August 06, 2010. He was 79 years old. The family will receive friends today, Saturday August 7, 2010 from 5:00 until 7:00 pm at The Poteet Funeral Home, 3465 Peach Orchard Road, Augusta. The funeral service will be conducted on Sunday, August 8, 2010 at 2:00 pm in the funeral home chapel. Entombment, with military honors, will follow the service in the Garden Mausoleum at Bellevue Memorial Gardens. Rev. Matthew Erickson and Pastor Phillip Armstrong will officiate. Mr. Zahner’s grandsons will serve as honorary pallbearers. Mr. Zahner is survived by his devoted wife of more than 59 years, Mrs. Eva Zahner; his children, Gayle Browne and her husband, Paul, of Waynesboro, Karon Bryant and her husband, David, of Dearing, Clifford Zahner of Hephzibah, Debra Solleder and her husband, Franz, of Hephzibah, Rodney Zahner and his wife, Dianne, of Waynesboro, and Sandra Hulett and her husband, Gary, of Waynesboro; his sister, Della Taylor; his brothers, Ralph and Harold Zahner; fifteen grandchildren and twenty-two great grandchildren. Mr. Zahner retired from the United States Army. When he enlisted, he was part of the Aireborne Division and was a paratrooper. While serving, he was in both the Korean Conflict and the Vietnam War. He received the Bronze Star and other medals. He was deactivated while in Vietnam and posted to Hawaii to lead the team that disassembled the Signal Corp Battalion there. His final posting was at Ft. Gordon as an instructor. His years of service to our country was a great source of pride for Mr. Zahner throughout his life. Following his military retirement, Mr. Zahner operated a demolition business. Later, he was a security guard at the Georgia War Veterans Home and with Sizemore Security. He retired from Qualex where he was a route courier and supervisor. Mr. Zahner was of the Catholic faith. He was a great lover of horses, enjoyed fishing, and was an avid gardener. He was a strong man who had a fantastic work ethic and lived for his family.

Mr. Lilbern S. Zahner of Hephzibah went home to be with his Lord and Savior on Friday, August 06, 2010. He was 79 years old. The family will receive friends today, Saturday August 7, 2010 from 5:00 until 7:00 pm at The Poteet Funeral Home,... View Obituary & Service Information

The family of Lilbern S. Zahner created this Life Tributes page to make it easy to share your memories.

Mr. Lilbern S. Zahner of Hephzibah went home to be with his Lord...

Send flowers to the Zahner family.