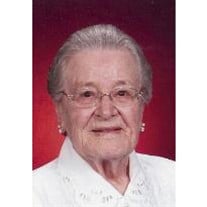 Maria Hildebrandt, of Augusta, died on Friday, February 26, 2010. She was 100 years old. The family will receive friends on Sunday, February 28, 2010 from 2:00 p.m. until 3:00 p.m. at The Poteet Funeral Home, 3465 Peach Orchard Road, Augusta. The funeral service will be conducted on Sunday, February 28, 2010 at 3:00 p.m. in the funeral home chapel. Committal services will be conducted at Gulf Pines Memorial Park in Englewood, Florida at a later date. Mrs. Hildebrandt is survived by her daughters, Erna Bullerkist of Edmonton Alberta, Canada, Trudy Clark and her husband, Larry of Augusta; her son, Heinz Hildebrandt of Jaffray B.C. Canada; four grandchildren; two great grandchildren; and two great-great grandchildren . Mrs. Hildebrandt was preceded in death by her husband of more than 63 years, Johann Hildebrandt, on January 17, 1992; her son in law, Fred Bullerkist, and her daughter in law, Noreen Hildebrandt. The family suggests that memorials be made to The Place at Martinez, 409 Pleasant Home Road, Augusta, Georgia 30907. The Poteet Funeral Home, 3465 Peach Orchard Road, Augusta, Georgia, 706.798.8886, is in charge of the funeral arrangements.

The family of Maria Hildebrandt created this Life Tributes page to make it easy to share your memories.

Send flowers to the Hildebrandt family.