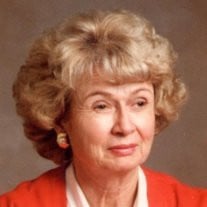 Mary Janice Bruner Entered into Rest Monday, June 17, 2013, Mrs. Mary Janice Palmer Bruner, 89, wife of the late Henry Bruner. She was preceded in death by a sister, Genevieve Evans, her grandson, Christian Taylor Bruner and her daughter, Cheryl Bruner Kleven. Mrs. Bruner was a native of Baker Hill, AL., but had made Augusta her home for the past 49 years. She was a devoted wife, mother, grandmother, great-grandmother and the most loving of sisters and aunt. She attended Perry Business College in Columbus, GA. She worked for the Chamber of Commerce in Columbus, GA., where she met General Dwight D. Eisenhower before he was elected President of the United States. She later worked for the law offices of Cooper, Cooper, Maiorello and Stalnaker for over 25 years as a loyal and most efficient legal secretary having worked alongside Jack Cooper, the head of the firm. Mrs. Bruner is survived by her son, Henry Gerald (Brenda) Bruner of Belvedere, S.C.; 3 granddaughters, Tami (Bill) Roose of Belvedere, S.C., Theresa (Darren) Thompson of Grovetown, GA., and Denise Kleven of Phenix City, AL.; 8 great grandchildren; 2 sisters, Mildred P. Jamison of Augusta, GA., and Nelda (Bill) Raines of Phenix City, AL. Family will receive friends Saturday 10 am to 11 am at The Poteet Funeral Home, 3465 Peach Orchard Rd., Augusta, GA., 30906, 706.798.8886, with services to follow at 11 am at the funeral home. Burial in Hillcrest Memorial Park.

The family of Mary Janice Bruner created this Life Tributes page to make it easy to share your memories.

Send flowers to the Bruner family.