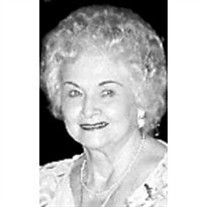 WINTER PARK, Fla. - Mary Frances O'Hara Baker Reese, 83, passed peacefully at her home in Winter Park, FL, on January 8, 2011. Born Mary Frances O'Hara, in Augusta, GA, on April 10, 1927, she was raised and eventually married during the first half of her life there. She raised two children, Tonya and John (Art), who gifted her with four grandchildren and two great-grandchildren whom she loved and cherished dearly. Mary was preceded in death by her parents, Charles and Rosalie, brothers Charles and Jack, sister Ora Lou, and her husband John Arthur Baker, Jr. She is survived by a younger sister and brother, Betty Lee Standard and Jerry P. O'Hara. Though never a player, Mary loved to watch golf, in person or on TV. Her favorite players of all time were Jack Nicholas and Arnold Palmer. Growing up in Augusta afforded her several opportunities to enjoy attending the Masters Tournament, always having a grand time. Mary was an independent, outgoing woman, a warm loving mother, the life of the party, friend to many, dedicated to her family and a loving wife. She was an incredible cook with many published Southern recipes, preparing such notable dishes as her crispy iron skillet fried chicken, pineapple upside down cake, black-eyed peas and stewed sweet tomatoes, her notorious holiday green Jell-O and without a doubt the most tasty Georgia pecan pie ever created in a kitchen. Though she lived the last half of her full life in Central Florida, she was never far from her deep roots to family in Augusta. Her final wish was to be laid to rest back home and thus the family will hold an intimate ceremony to celebrate Mary's life on earth and transition to eternal life with God the Father. A funeral mass will be held on Friday, February 25, 2011, 11:00 a.m. at St. Mary on the Hill Catholic Church with interment to follow at Westover Cemetery. Arrangements are being handled by Poteet Funeral Home in Augusta, GA.

The family of Mary Frances O'Hara Baker Reese created this Life Tributes page to make it easy to share your memories.

Send flowers to the Reese family.