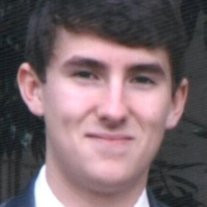 Hephzibah, GA Nicholas “Nick” Goodwin, age 15, of Hephzibah, GA., passed away Sunday evening from injuries sustained from a dirt bike accident. Nick was a sophomore at Hephzibah High School where he played soccer. He excelled in his academics.... View Obituary & Service Information

The family of Nicholas "Nick" Goodwin created this Life Tributes page to make it easy to share your memories.

Send flowers to the Goodwin family.