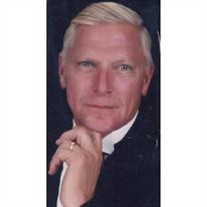 Richard “Dick” H. Johnson Mr. Richard “Dick” H. Johnson entered into rest on Friday, February 10, 2012 at the nursing home care unit (1C) at the Augusta VAMC. The visitation will be conducted tomorrow, Monday, February 13, 2011 from 6:00 until 8:00 p.m. at The Poteet Funeral Home, 3465 Peach Orchard Road, Augusta. Mr. Johnson was cremated. A private committal service will be held at Georgia War Veterans Cemetery in Milledgeville, Georgia. Dick is survived by his wife, Barbara J. “BJ” Powell-Johnson; his son and daughter-in-law, Dennis J. and Brandi Powell, of Morristown, Tennessee; his daughter, Lisa Wagneeror; his son, Kristopher Johnson; his sisters, Linda (Damin) Davis, of Hartcourt, Iowa, Marilyn Johnson, and Jeannie (Roger) Douglas, of Fort Dodge, Iowa; his brother, Arthur (Rose) Johnson, of Fort Dodge; his three grandchildren; several nieces and nephews. Dick was born and raised at Fort Dodge, Iowa. He was the son of the late Harold C. and Jemima Johnson. He served in the United States Marines Corp and the US Army Reserves. He was a lifetime member of VFW Post 649 and Military Order of the Cootie. He was also a past Commander of American Legion Post 178. Flowers are welcomed, or memorials may be made to the Alzheimer’s Association, 1899 Central Avenue, Augusta, GA 30904-5755, or online at www.alz.org/join_the_cause_donate.asp. The Poteet Funeral Home, 3465 Peach Orchard Road, Augusta, 706.798.8886 is in charge of the arrangements.

The family of Richard Harold Johnson created this Life Tributes page to make it easy to share your memories.

Send flowers to the Johnson family.