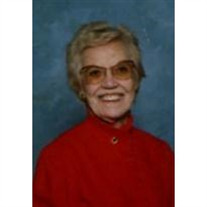 Mrs. Rita J. Billman, 87, of Brandon Wilde, Evans, Georgia, beloved wife of the late Calvin J. Billman, passed away on February 26, 2009. Rita was a member of the Church of the Good Shepherd in Augusta, Georgia where she had been active in Altar Guild and St. Catherine’s Circle. She was also past president of the Floral Arts Garden Club of Kingston, and she was an active member of The Faculty Wives of Augusta College. She loved to crochet and made several afghans. She took great pride in crocheting an afghan for each of her grandchildren in their favorite colors. Prior to moving to Augusta, she was an Office Administrator for the Florida Development Commission in Tallahassee, Florida. Rita was also a realtor in Tallahassee and later in Augusta when she and Calvin moved there in 1966. Rita was born in Washington, Louisiana on July 20, 1921. Her parents were Adam Johnson and Virginia Ryder. She was blessed with 8 brothers, Eldridge, Wilson, Crawford, Carlton, Leo, Emil, Albert and Adam, all deceased now. At 12 years of age Rita and her family moved to Crowley, Louisiana after her father’s death. She graduated in 1938 from Crowley High School where she lettered in girls’ basketball for 4 years. She then attended Phillips Business School while working at the Crowley Motor Company. She met her future husband in 1941 in Lafayette, Louisiana at a USO Party. This wartime romance culminated in their marriage on February 14, 1943 in Columbus, Georgia where Calvin was stationed. While Calvin was overseas in the European Theater, Rita worked in a war defense plant in Little Rock, Arkansas where they manufactured bullets. Calvin was honorably discharged in 1944, and they began a married life in Cedar Falls, Iowa where Calvin began his academic studies at Iowa State Teachers’ College. During this time Rita worked at the Clay Equipment Company in Waterloo, Iowa. Their first child, Jim, was born in October, 1945, and their second child, a daughter, Jannita, (Jan) was born in October 1947, both in Waterloo, Iowa. In 1951, the family moved to New Orleans while Calvin earned a Master’s degree and a PhD degree in Latin American History from Tulane University. During this time Rita worked as a secretary in the graduate school office. Upon completion of his studies, they moved to Tallahassee, Florida and Calvin began his teaching career at Florida State University. Rita worked as an Administrative Assistant, took college classes and later became a real estate agent. Somehow, she squeezed in time to sew many of her work outfits and produce dress shirts and vests for her husband. In 1966 Calvin and Rita moved to Augusta, Georgia where Calvin was Chairman of the History, Political Science and Philosophy Department at Augusta College which today is Augusta State University. Rita and Calvin loved to travel in the summer and visited Mexico and many South American countries. For fifteen summers they drove their camper to Crawford’s Resort in Nestor Falls, Ontario, Canada and happily camped and fished. On many of these fishing trips, one or more of the grandchildren was invited for this adventure. She is survived by a son Dr. Calvin James Billman of Anchorage, Alaska (Lily) and a daughter, Jannita B. Morin, of Woodstock, Georgia (Howard). She is also blessed with six grandchildren, David Billman, Cameron Billman and Jennifer Billman, all of Anchorage, Alaska and Jon Billman of Seattle, Washington, Jason Morin of Atlanta, Georgia (Adrianne), Sarah Morin of Bloomington, Indiana, two great grandsons, Tyson and Kiefer, one sister-in-law, Ethel Johnson of Groves, Texas (Adam) and numerous devoted nieces and nephews, great nieces and nephews and grand nieces and nephews. Funeral services will be held at 10:30 AM on Friday, March 6 at the Church of the Good Shepherd. The Very Rev. Robert Fain and The Rev. Dr. Andrew Menger will officiate. Burial will follow in Westover Memorial Park where Rita will be laid to rest with her husband, Calvin, and granddaughter Diana. In lieu of flowers, memorials may be made to the Church of the Good Shepherd, 2230 Walton Way, Augusta, Georgia 30904, or The American Cancer Society, 1-800-ACS-2345 or www.cancer.org. The family will receive friends and visitors between 6:00 PM and 8:00 PM on Thursday, March 5 at Poteet Funeral Home, 3465 Peach Orchard Rd, Augusta, Georgia, 706.798.8886. The Poteet Funeral Home, 3465 Peach Orchard Road, Augusta, Ga. 706-798-8886 is in charge of the funeral arrangements.

Mrs. Rita J. Billman, 87, of Brandon Wilde, Evans, Georgia, beloved wife of the late Calvin J. Billman, passed away on February 26, 2009. Rita was a member of the Church of the Good Shepherd in Augusta, Georgia where she had been active in Altar... View Obituary & Service Information

The family of Rita J. Billman created this Life Tributes page to make it easy to share your memories.

Send flowers to the Billman family.