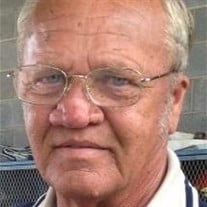 Hephzibah, GA. Robert T. Brandon, Jr., age 67, passed away Monday, October 26, 2015 at Select Specialty Hospital. He was born August 20, 1948, in Augusta, GA., to the late Robert T. and Ollie Mae Godman Brandon, Sr. He retired as a Maintenance Supervisor at the Augusta Regional Airport. He was a member of the Shade Tree A’s Model “A” Club and was a veteran of the U.S. Navy. He is survived by his wife of 45 years, Deana; his children, Shawn (Tara) Brandon and Melinda (Jessy) Willmon; one grandson, Dylan Brandon; one sister, June Brandon. Family will receive friends Thursday 7 pm to 9 pm at THE POTEET FUNERAL HOME, 3465 Peach Orchard Rd, HWY 25, Augusta, 30906. Funeral Services will be Friday, 11 am at the funeral home with Rev. Wally Hoyle, officiating. Burial will be in Hillcrest Memorial Park where Military Honors will be rendered. Active Pallbearers will be Tommy Pennington, Sonny Jenkins, T. J. Pennington, Lenny Dozier, John Adams and Dylan Brandon. Honorary Pallbearer will be Reggie Reynolds.

The family of Robert T. Brandon created this Life Tributes page to make it easy to share your memories.

Send flowers to the Brandon family.