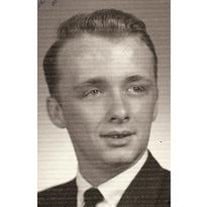 Mr. Robert Paskel McConnell Jr. Retired US Army Mr. Robert Paskel McConnell of Hephzibah died on Monday, March 29, 2010 at Doctors Hospital following several months of declining health. He was 68 years old. The family will receive friends today, Wednesday, March 31, 2010 from 6:00 until 8:00 pm at The Poteet Funeral Home, 3465 Peach Orchard Road. The graveside service, with military honors, will be conducted on Thursday, April 1, 2010 at 11:00 am in the family plot at Hillcrest Memorial Park. Rev. Michael Roverse will officiate. Mr. McConnell is survived by his sons, James R. McConnell of Newport News, Virginia, William A. McConnell and his wife, Crissie, of Grovetown, and Thomas W. McConnell and his wife, Bianca, of Grovetown; his grandchildren, Kriston McConnell, Justin McConnell, Taylor McConnell, Alexis McConnell, and a granddaughter who will soon be born, Isabella McConnell; his sister, Jenny Wells, of Tennessee; a brother, Mike McConnell, of Florida. He was preceded in death by his wife, Betty Jean Eicher McConnell, in 2002; his parents, Robert Paskel McConnell Sr. and Thelma June Whitehead McConnell. Mr. McConnell was in the United States Army for more than 20 years. He served two tours of duty in Vietnam. After his retirement, he taught at Ft. Gordon. He was proud of the fact that his sons followed him into the military and their combined service was more than 50 years. Mr. McConnell was a member of the Republican Party, the National Rifle Association, and the VFW. He was a volunteer at the VA. He enjoyed collecting guns and was passionate about family genealogy, tracing his own family back to the 1600’s. Mr. McConnell was very attached to his Boston Terrier, Red. The Poteet Funeral Home, 3465 Peach Orchard Road, Augusta, Georgia, 706.798.8886, is in charge of the funeral arrangements.

The family of Robert P. McConnell created this Life Tributes page to make it easy to share your memories.

Send flowers to the McConnell family.