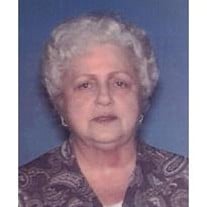 Mrs. Shelba J. Davis Mrs. Shelba J. Davis of Hephzibah, Georgia went home to be with the Lord on September 19, 2010. The family will receive friends on Wednesday, September 22, 2010 from 5:00 until 7:00 p.m. at The Poteet Funeral Home, 3465 Peach Orchard Road, Augusta. Wednesday evening at 7:00 p.m. a funeral service will be held in the funeral home chapel. The committal service will be conducted on Thursday, September 23, 2010 at 11:00 a.m. at Georgia Veterans Memorial Cemetery in Milledgeville, Georgia, where she will be buried with her love and best friend, Tommy. Mrs. Davis was a long time employee of Augusta Medical Systems. She loved to spend time with her four beautiful grandchildren, and loved to cook and bake. Mrs. Davis was preceded in death by the love of her life, Thomas E. Davis of 50 years, and parents, AL and Nea Watkins. She is survived by her daughter, Sherry L. Person and her husband Kenny; son, David Davis; grandchildren, Shanon Person, Joshua Person, Thomas Davis, Victoria Davis, and a daughter- in- law, Michelle Vaughn. Also survived by her sister, Glenda Fulmer; brother Larry and his wife Laura Watkins; and sister- in- law, Bettie and her husband Guy Brandon. The Poteet Funeral Home, 3465 Peach Orchard Road, Augusta, Georgia, 30906, 706.798.8886, is in charge of the funeral arrangements.

The family of Shelba Jean Davis created this Life Tributes page to make it easy to share your memories.

Send flowers to the Davis family.