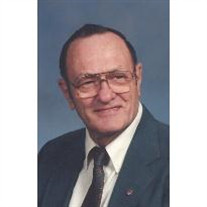 Mr. Thomas C. McCollum Deacon Emeritus Hillcrest Baptist Church Mr. Tom C. McCollum, of Augusta, died on Thursday, October 06, 2011. He was 87 years old. The family will receive friends, Saturday October 8, 2011 from 2:00 until 4:00 p.m. at The Poteet Funeral Home, 3465 Peach Orchard Road, Augusta. The funeral service will be conducted on Sunday, October 9, 2011 at 2:00 p.m. at Hillcrest Baptist Church, 3405 Deans Bridge Road, Augusta. Mr. McCollum will lie in state at the church on Sunday from 1:30 p.m. until the time of the funeral service. Dr. L. Gordon Robinson will officiate. Committal services will be held on Monday, October 10, 2011 in Trion, Georgia. Mr. McCollum is survived by his wife of more than 64 years, Mrs. Ruth B. McCollum; his daughter, Elizabeth “Betsy” Newman, of Chattanooga, Tennessee; his brother, Gordon D. McCollum, of Summerville, Georgia; his nephew, Jimmy McCollum, of Augusta; his niece, Judy Love, of Summerville, Georgia. Mr. McCollum was a member of Hillcrest Baptist Church where he had served as a deacon. By trade, he was a custom architectural millworker. He used his trade in the mission field to build pulpit furniture that is used in many churches across the country and in many parts of the world. His life and work touched many people. He served in the United States Army during WWII. He received a Purple Heart during his wartime service. The family suggests that memorials be made to Hillcrest Baptist Church Lottie Moon Offering Fund, 3405 Deans Bridge Road, Augusta 30906. The Poteet Funeral Home, 3465 Peach Orchard Road, Augusta, 706.798.8886 is in charge of the arrangements.

The family of Thomas Carlton McCollum created this Life Tributes page to make it easy to share your memories.

Send flowers to the McCollum family.