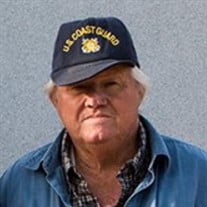 Blythe, GA – Mr. Thomas V. Ledbetter Husband of Betty Ledbetter of thirty-eight years enter into rest on Friday, February 20, 2015 at the Charlie Norwood VA Medical Center. Mr. Ledbetter was born in Winder, GA. He was the son of the late Thomas V. Ledbetter and Freddie Dell Bennett. Tom served his country with pride in the US Coast Guard, where he enlister in 1957 at the age of 17 and by the age of 25 he attained the rank of Chief. Tom owned Ledbetter Services. He dealt with heavy equipment and sewer systems and was very dedicated to his work. Tom known as Papa enjoyed spending time with his grandchildren and at his lake house. In addition to his wife, Mr. Ledbetter is survived by his son and daughter in law, Logan Scott and Linda Ledbetter, sons, Thomas Hunter Ledbetter, Ben Ledbetter, daughters and sons in law, Theresa and Steven Chavous, Lily and Matt Withrow, step Daughter, Latrilla Connell, brothers Robert Ledbetter, Harold Ledbetter, grandchildren, Nathan Ledbetter, Chase Chavous, Logan Ledbetter, Dawn Hofilena, Ashley Withrow, Leah Withrow, Matt Withrow, and Bradley Withrow. Funeral Services will be held on Wednesday, February 25, 2015 at 10 am in The Poteet Funeral Home Chapel, 3465 Peach Orchard Rd, Augusta, GA. Interment will follow the service at 2:30pm at the GA Veterans Memorial Cemetery in Milledgeville, GA with military honors. The family will receive friends at the funeral home on Wednesday from 9am until the hour of service.

The family of Thomas Velt Ledbetter created this Life Tributes page to make it easy to share your memories.

Send flowers to the Ledbetter family.