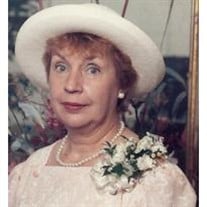 Mrs. Wilma Maria Miller Mrs. Wilma Maria Miller, nee Heinrich, of Augusta, died on Friday, October 1, 2010. She was 69 years old. Mrs. Miller is survived by her husband of more than fifty one years, Mr. Vernon Leon Miller, of Augusta; her children Audrey M. Jackson of Sumrall, Mississippi, Angela A. Miller of Walls, Mississippi, Mark V. Miller of Martinez, Mike L. Miller of Omaha, Nebraska, and Monty L. Miller of Augusta; her grandchildren, Scott, Chris, Nick, Melissa, Rachel, Hannalee, Shelby, and Avery; many loving family members in Germany. Mrs. Miller was born November 8, 1940 in Waiblingen, Germany. She was the daughter of the late Ludwig and Anna Maria Heinrich. Along with her parents, she was preceded in death by her sister, Maria. She was married, on December 8, 1959, to Mr. Vernon Miller. He was in the United States Army and they lived in many places throughout his military career. In 1971, they settled in Augusta. Mrs. Miller was an animal lover. She also enjoyed gardening, especially growing flowers. Her greatest passion, however, was spending time with her family.

The family of Wilma Maria Miller created this Life Tributes page to make it easy to share your memories.

Send flowers to the Miller family.